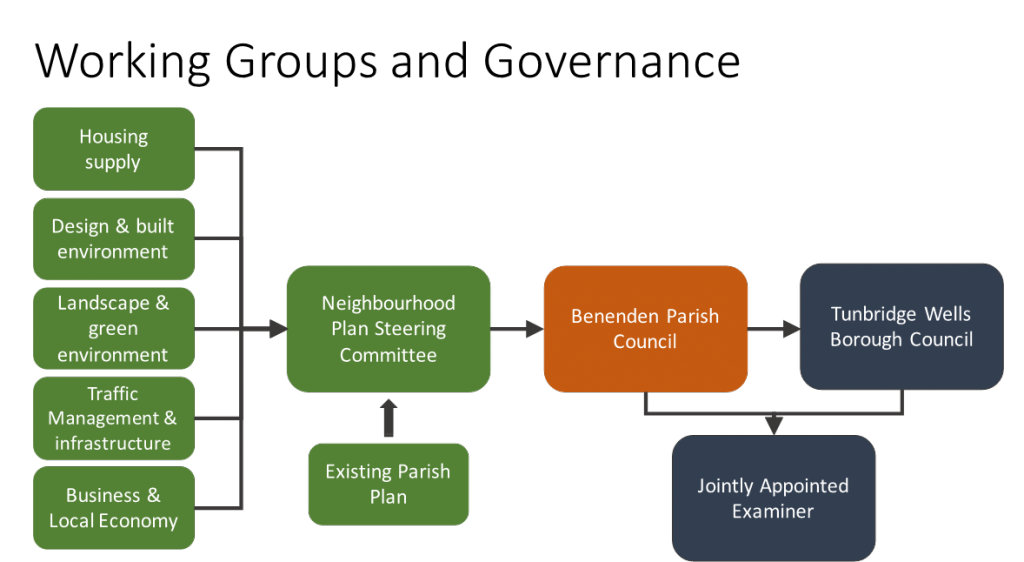 To support us we have 2 External Consultants; Jim Boot, and Michael Thornton, who bring experience of working in local planning, and in particular developing Neighbourhood Plans.

Paul moved to Benenden from Tunbridge Wells in June 2010.  He was Operations Director at both Royal Mail and G4S before setting up his own business resulting in him working in mainly Brussels. He joined the team developing Benenden Community Shop and is Deputy Chair of the shop committee.

Paul occasionally turns out for Benenden CC (when they have exhausted other options) and is a member of Surrey CCC.  He believes the parish has quintessential English rural charm that must be nurtured if it is to survive. While recognising that times change and the challenge of a growing UK population, he is keen to make sure the community of Benenden continues to evolve, shaped by the very many special people who live here.

I was born in London and spent my earlier years living at home with my parents in Beckenham and Orpington. I met Angela in 1992 and together with my son Kurt; I lived with Angela in Chislehurst. We married in 1993 and built our first house together in Tonbridge where my second son Hugo was born in 1997. We moved to the centre of Benenden in 2007 for the local schools and to get further into the Kent countryside. We spend the first 18 months in Benenden making new friends and extending and refurbishing our house.

A Bricklayer by trade; I continued studying Building Management until my late 20’s, working for a number of large building contractors until 1984 after-which I decided I wanted to have my own Building Company. The last 26 years I have been self-employed as a Building Project Manager, working from home where I can enjoy my passion for design.

Since living in Benenden I have been involved with a number of local projects including the Parish Plan and our Community Shop “Benenden’s”.

I have worked on the Benenden Neighbourhood Development Plan since the start. I am focusing on “Business and Local Economy”, which I feel passionate about helping.  I would like to help existing and new residents by giving them the opportunity to work locally, attracting existing companies to grow within the Parish. Also allowing new residents to bring their business opportunities into Benenden in order to grow and prosper.

Born in Chatham in 1954, Graham went to a school which influenced his passion for music. Despite wanting to pursue a career in music, he decided to study Civil and Structural Engineering at Sheffield University as a safer option and was awarded an honours degree in 1977.  He subsequently joined Taylor Woodrow and was involved in many different projects including opencast coal mining, construction of an underground communication centre, Brighton Marina and Mildenhall USAF air-force base.  He qualified as a Civil Engineer (MICE) in 1982.  He married Beverley in 1987 and they have two children.  He started his own business in Office Fitting Out in 1989 working nationally from his office in London.  He moved to Benenden in 1999 and has been involved in the Benenden Players every year since then.  He retired in 2017 giving him more time to devote to local groups including the Neighbourhood Plan.

I studied History of Art at the Courtauld Institute, London University and for most of my working life was in publishing as an editor/designer/publisher of illustrated books, many of them on art, archaeology or architecture. I’ve lived in Iden Green since 2001 and have 3 children who are now working in London. I was Chair of the Parents Association at Sandhurst Primary School for 2 years. I have also worked for Arena Pursuits, at Pashley Manor and most recently as a teacher of English as a Second Language. I helped put together and publish the Benenden Parish Plan 2015.

I lived and worked for many years in London, initially as a Chartered Accountant then building a computer software business. Like my wife, Joanna, I grew up in the countryside and we were keen to return to that type of environment. Hence our recent move to Benenden and its beautiful surroundings.

I am keen to help ensure housing development has minimal negative impact on the outstanding area I have chosen to live in. In particular, I want to make sure we keep the special ancient habitats we are privileged to enjoy, and even enhance them where feasible.

My professional career was spent with the Bank of England. Needing a change from commuting on the Central Line, we moved to Benenden in July 2007 and began creating a garden and smallholding with a flock of pedigree sheep (Hampshire Downs) and other well-kept and contented animals. In May 2014, I was selected to stand as the Conservative candidate for the Benenden & Cranbrook Ward of Tunbridge Wells Borough Council in and was elected in place of the incumbent Liberal Democrat.

I was re-elected in May 2018 with a pleasing 50% share of the vote. At TWBC I chair the Overview & Scrutiny Committee and am on the Planning Committee and the Finance & Governance Cabinet Advisory Board.

The relentless pressure to build more houses is today’s big issue. The assessed need for TWBC is to provide for 13,840 more dwellings up to 2033. Local views on the best (or least worse) places for new homes and businesses need to be heard and the Neighbourhood Development Plan is a good vehicle to assemble and present these views.

I moved to Benenden from London in 2011 with my husband, Peter and youngest daughter, Amelia, and we live in Cranbrook Road with a great view of the wonderful countryside around us, and love being part of village life here. I joined the Parish Council in 2013, and became Vice-Chair in 2014. Then after the sad death of Peter Davies in March of this year, I became Chair. During my time as a Parish Councillor I have also held a four year term as School Governor at Benenden Primary School, during which we negotiated and fought for the funding of the new school project, now in the process of being built.

I work at Bloomfields, a planning consultancy in Paddock Wood, which is a subsidiary of Lambert and Foster. My daughter attended Benenden Primary School until 2016, and she now attends Tonbridge Grammar School. We can both be found volunteering at the village shop every Saturday morning, and really enjoy catching up with everyone there each week. My husband Peter is a horse racing journalist mostly working from home, and he is also co-editor of our village magazine.

During my time on the Parish Council, the Parish Plan was formulated and delivered, and the NDP is a natural progression on from this. The NDP will ensure that the vision incubated in our Parish Plan can be expanded to shape the development and growth of our village. It will ensure we get the right type of development in the right place for all our community needs.

The Steering Group normally meets monthly.  It is responsible for co-ordinating the work of each Working Group, resolving issues and pulling together the plan and policies, and agreeing them with the Parish Council.  Each month they update the Parish Council on progress, and update the village via the Parish Magazine, and this website.

Examiner Hearing – 25th June 2021
A public hearing hosted by Tunbridge Wells Borough Council.  Find out more here.
Pop-in sessions – 23rd Nov 2019
Find out more about what happens to now the Regulation 14 consultation has closed.  Sessions are on Saturday 23rd November, and the NDP team will be available at:

This website uses cookies to improve your experience while you navigate through the website. Out of these, the cookies that are categorized as necessary are stored on your browser as they are essential for the working of basic functionalities of the website. We also use third-party cookies that help us analyze and understand how you use this website. These cookies will be stored in your browser only with your consent. You also have the option to opt-out of these cookies. But opting out of some of these cookies may affect your browsing experience.
Necessary Always Enabled
Necessary cookies are absolutely essential for the website to function properly. This category only includes cookies that ensures basic functionalities and security features of the website. These cookies do not store any personal information.
Non-necessary
Any cookies that may not be particularly necessary for the website to function and is used specifically to collect user personal data via analytics, ads, other embedded contents are termed as non-necessary cookies. It is mandatory to procure user consent prior to running these cookies on your website.
SAVE & ACCEPT